Brno - Statue of the Knight on Moravian Square

In 2015, an equestrian statue was placed on Moravian Square in front of the Moravian Gallery of a knight in armor with a shield and spear, its tip reaching a height of eight meters. The statue is remarkable not so much for its overall "giraffe" height, but for the disproportionately long legs of the horse which emerge directly from the ground (the statue has no pedestal), so people can walk freely among the legs.

The sculpture, designed by the renowned contemporary Czech sculptor Jaroslav Róna (*1957), depicts the Moravian Margrave Jošt (1351-1411) and at the same time (or rather) represents an allegory of courage. After the work was installed, it caused a considerable stir, evoking a myriad of contradictory reactions, but over time it has increasingly grown into the hearts of the people of Brno, and it's not impossible to imagine that over the coming years the statue might become one of the city's symbols. The knight has a downcast expression and his face is concealed, giving the statue a slightly eerie expression; the horse, on the contrary, is baring his teeth and could even, with a little imagination, be laughing – but each visitor to Brno will judge this for himself. 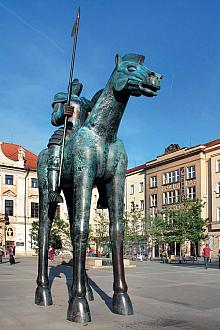