Without a doubt, this is the biggest and most famous landmark of the city. The castle on a rocky hill of the same name above the city was founded in around 1250 by the later king Přemysl Otakar II, at the time still a Moravian margrave. Over the centuries, the castle changed both function and form. Přemysl Otakar founded it as a dignified seat of the Moravia rulers and in support of the royal power of the Czech kings, who visited it only sporadically. Even the Moravian margraves used it only briefly, with Jan Jindřich (reigning from 1350 to 1375) and then Jošt of Moravia (1375-1411) living here. And because Jošt was elected Roman king in 1410, Špilberk became the seat of the ruler of the Roman German Empire. This only lasted three months, unfortunately, because Jošt soon died. This also ended the era of Špilberk castle as a residence, and it became a military fortress. From the late 15th century, the castle often changed owners and generally deteriorated. Repairs finally came during the Thirty Years' War, while it also withstood several months of siege by the Swedes. With further enhancements of its defensive system that continued into the mid-18th century, Špilberk gradually became the mightiest fortress in Moravia.

From the beginning of the 17th century, Špilberk was also used as a prison; in 1783 Emperor Joseph II had it turned into a civil prison for felons. At that time, Špilberk was considered the toughest prison in Europe and was known as the "prison of nations". It lost its statute as prison in 1855, but still during the 1st World War politically persecuted opponents of the Austrian monarchy were involuntarily placed there, as well as people persecuted by the German Nazis during WWII. Probably the most attractive thing that visitors can see at Špilberk are the casemates. Originally they served as a refuge for soldiers from an artillery attack, but gradually these two-storey arched windowless hallways began to be used as a prison for the toughest criminals. The casemates have been open to the public since 1880, and today you can visit them as part of guided tours. When visiting Špilberk, you shouldn't miss the observatory on the top of the corner tower. After climbing 103 steps, in nice weather you can even see the peaks of the Pálava. The large courtyard of the castle holds a well 119 meters deep, reaching down even lower than the level of the 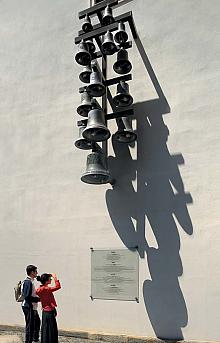