Malinovsky Square is dominated by the neo-Renaissance (and partly neo-Classicist and neo-Baroque) building of the Mahen Theater, built in 1881-1882. The impetus for its construction was the fire that destroyed the Brno City Theater in 1870. The architectural design of the theater is the work of Viennese architects with notable names, Hermann Helmer and Ferdinand Fellner, specializing in theater buildings. The theater has 569 seats and was ceremonially opened on 14 November 1882 with the performance Egmont by J. W. Goethe, set to music by Ludwig van Beethoven. The theater is named after the Brno playwright Jiří Mahen, who from 1918 to 1920 was its first dramaturge after the formation of independent Czechoslovakia. It is the home stage of the National Theater in Brno. The building, occupying an area of 2,700 square meters, cost 500,000 gold pieces at the time. The interior is neo-Baroque and richly decorated – above the auditorium we can see ceiling allegorical lunettes and an impressive crystal chandelier. The curtain was designed by Austrian painter Franz Lefler
(1831-1898). 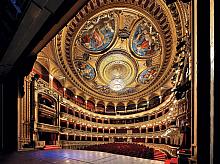