The nearby Janáček Theater, part of the National Theater in Brno and almost a hundred years younger than the Mahen Theater, is located on Rooseveltova Street. The history of this theater's construction is surprisingly long and laced with a myriad of ups and downs and twists and turns: the first designs appeared at the beginning of the 20th century, and seven (!) competitions for the project construction took place during the years 1910-1958. The competitions were attended by renowned architects, including Jan Kotěra, Josef Gočár, Pavel Janák, and others. In 1958, the winner was finally the Brno architect Jan Víšek (1890-1966), whose design was used for the building. The theater was opened on 2 October 1965 with the opera "The Cunning Little Vixen" by the composer whose name the theater bears. 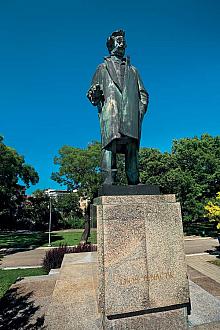