This church is also known as the Church of the Annunciation of the Virgin Mary and St. Thomas. It stands on Moravian Square and its history is associated with the Augustinian monastery, founded precisely in the middle of the 14th century. This was already the second founding of the same monastery, since the first Augustinian monastery in Brno burnt down in 1346. The Prague workshop of Petr Parler also contributed to the construction. The church (probably still unfinished) was consecrated in 1356 with the attendance of Emperor Charles IV. During the Hussite wars, in 1428, the church and the monastery were severely damaged, then another disaster hit in 1500 when a major fire struck the monastery. At the beginning of the 17th century the church was again damaged repeatedly, until a reconstruction began in 1661, based on the design of architect Jan Křtitel Erna, which gave the church the Baroque form that we know see today. 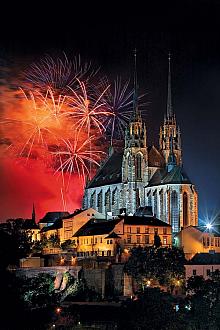