Brno - Church of J. A. Comenius

The church is better known as the Red Church because of its walls made of unplastered bricks. It stands on Comenius Square and was built in 1863-1867, designed by the Austrian architect Heinrich Ferstel and named the Church of Christ. The competition for the project was announced by the Brno Lutherans, who utilized the February Constitution (1861) of the guaranteed right of Protestants to build their own churches in the Austro-Hungarian monarchy. The building tied into the legacy of the North German Protestant Gothic and immediately after its completion became the dominant feature of the circular boulevard and indeed the entire inner city. The interior furnishings of the church are, in the spirit of the Protestant tradition, simple and even austere.
The Red Church's excellent acoustics make it a favorite venue for concerts, especially sacred music.
www.cervenykostel.cz 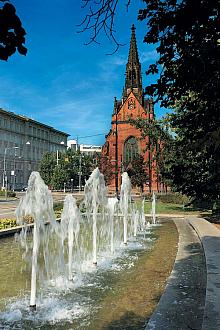