The day when passenger flights to Brno were launched is considered to be 23 May 1926, when on a grassy airport in Brno-Černovice, the first aircraft landed with 12 passengers. A year later, regular mail transportation began, and by the late 1920's there were already regular flights for passengers traveling to Prague, Bratislava, Košice, Bucharest, Sarajevo, and other cities. In 1938, air passenger traffic in Brno was interrupted by the war, but operation was restored in the postwar years. The runway's grass surface, however, was no longer sufficient for the new types of aircraft, so the year 1950 saw the initial construction of a new airport near the village of Turany. In 1967 the terminal building was built, and in 1972 the airport was further extended. In 1989, Turany acquired the status of a public international civil airport. In 2006, the new terminal building was completed which was subsequently awarded Building of the Year in 2007. In 2008, the airport handled more than half a million passengers for the first time.

Transport:
By car: the airport is 2 km from exit number 201 from the D1 motorway.
Public transport: buses no. 76 and N89 (link Brno Hlavní nádraží – Letiště Brno) 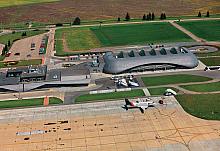