Above the waters of the Brno Reservoir, 20 km northwest of the city of Brno, stands the Veveří Castle, one of the largest castle complexes in the country. It was built as a fortified residence for the royal burgrave around the originally Romanesque structure sometime in the 13th century (it was first noted in 1213). During the reign of the Moravian Margrave Jan Jindřich, the castle was expanded and gained its present appearance. Since the late 15th century it was no longer royal property and the castle changed ownership through several noble families, for example the Lords of Ludanice, of Lipa, and the Černohorská family from Boskovice. There is a direct bus line to castle from Bystrc, or you can get there by boat in the summer.

Guided tours of the castle:
Free tour of the castle complex (non-guided tour of the courtyard, entrance to the walking galleries of the “Příhrádek” adjacent castle, the lookout point of the Powder Tower, selected seasonal exhibitions)

Route I – guided tour of the interior I (representative rooms, upper floor of the palace with Břitová Tower, observation deck – about 40 minutes, max 30 persons per group)

Route II – guided tour of the interior II (selected parts of the exterior, Břitová Tower, attic of the castle, interior of the English tract, and others – for persons older than 15 years; the route is physically demanding and sports shoes are recommended, max. 10 persons per group).
Phone: +420 549 420 164
www.veveri.cz 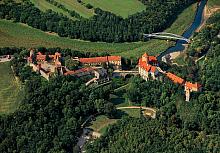