This neo-Renaissance burgher palace was built in 1847-1848 on a design by Viennese architect Ludwig von Förster. It was built for the Klein family who traded in iron. This was also reflected onto the house, respectively into its facade, which was fitted with distinctive architectural elements of cast iron.
In 1946, the palace was confiscated and began to deteriorate, mainly due to insufficient maintenance and the confused and inadequate use of its premises for various purposes. The years 1995-1997 saw a costly reconstruction (to the tune of about 70 million CZK) and the house was brought back to life. 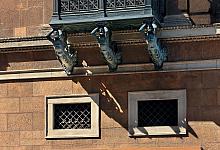