The main exhibition building of the Moravian Museum (exhibitions of paleontology, mineralogy, prehistory, and early Middle Ages) is located in the upper part of the Vegetable Market Square. This was built from 1614-1618 by the Bishop of Olomouc and Cardinal Franz von Dietrichstein (1570-1636), known for his authority and power as the "Moravian King". This was originally an early Baroque building, rebuilt in High Baroque style sometime in the second quarter of the 18th century by Domenico Martinelli.

The building has been honored by visits from prominent personalities, including Frederick of the Palatinate in 1620, Empress Maria Theresa in 1748, and Russian General Kutuzov in 1805, shortly before the Battle of Austerlitz. 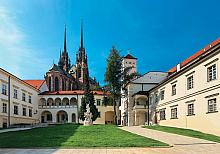