At the top of Petrov Hill, on a site where a Romanesque rotunda stood from the 12th century, gradual reconstructions (Romanesque basilica, later early Gothic church) have resulted in a Gothic cathedral which today represents one of the city's most prominent landmarks. Today's cathedral, with its two 84 m high towers, is from a neo-Gothic reconstruction that took place in 1904-1909 by the architect A. Kirstein. The church's interior furnishings are Baroque, from the 18th century. It became a cathedral, i.e. the main church of a bishop, in 1777, when the Diocese of Brno was established.

The remains of the original Romanesque-Gothic building from the 12th century and other later reconstructions are visible today in the church crypt. The crypt also serves as an occasional venue for chamber concerts, exhibitions, and lectures. In contrast, the cathedral treasury holds a permanently installed exhibition displaying valuable items that were previously hidden in the depositories – monstrance, liturgical textiles, and more.

The southern and northern tower of the cathedral provides visitors with an amazing view of Brno and its surroundings (in good weather, to the Pálava biosphere reserve) after ascending the 130 steps. The Brno Cathedral of St. Peter and Paul (locally known as Petrov) is indeed a national monument, but most Czechs see it every day on the Czech ten-crown coin. 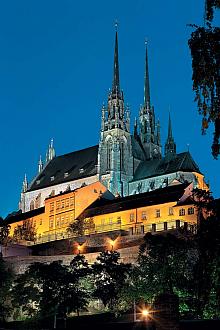 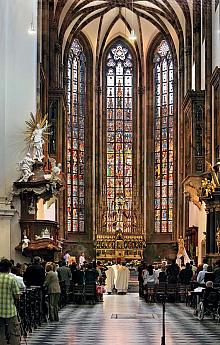